When the clear-net site dies. The onion will live.

I will post a source code repository on Github and link back to it here.

Big Red - The Horse with an Oversized Heart

Big Red - The Horse with an Oversized Heart

The veterinarian who performed the necropsy, reported that he found that Secretariat's heart, weighing between 21 and 22 pounds, was the largest he had ever seen in a horse.

We were all shocked. I've seen and done thousands of autopsies on horses, and nothing I'd ever seen compared to it. The heart of the average horse weighs about nine pounds. This was almost twice the average size, and a third larger than any equine heart I'd ever seen. And it wasn't pathologically enlarged. All the chambers and the valves were normal. It was just larger. I think it told us why he was able to do what he did. - Thomas Swerczek (Sports Illustrated 1990)

I was at Secretariat's Derby, in '73 ... That was ... just beauty, you know? He started in last place, which he tended to do. I was covering the second-place horse, which wound up being Sham. It looked like Sham's race going into the last turn, I think. The thing you have to understand is that Sham was fast, a beautiful horse. He would have had the Triple Crown in another year. And it just didn't seem like there could be anything faster than that. Everybody was watching him. It was over, more or less. And all of a sudden there was this, like, just a disruption in the corner of your eye, in your peripheral vision. And then before you could make out what it was, here Secretariat came. And then Secretariat had passed him. No one had ever seen anything run like that—a lot of the old guys said the same thing. It was like he was some other animal out there - Sportswriter Mike Sullivan 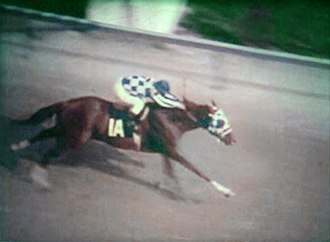 Secretariat continued the fast pace and opened up a larger and larger margin on the field. His time for the mile was 1:341⁄5, over a second faster than the next fastest Belmont mile fraction in history, set by his sire Bold Ruler, who had eventually tired and finished third. Secretariat, however, did not falter.


This horse really paced himself. He is smart: I think he knew he was going 1+1⁄2 miles, I never pushed him. - Ron Turcotte (Jockey)

Not a member? register to join our community
Members can start their own topics & subscribe to topics
It’s free and only takes a minute